On Top of Spaghetti!!

today we painted with spaghetti, and
I had never heard so much laughter and giggling
from an activity before!
The kiddos couldn't get enough of it!
WHAT A MESS!!!

-First off I have to say "wasting" food is something I struggle with-
I worked at a preschool where some of the children's only meals
were at school!  And that was hard to see!
So I hated "wasting" food!
So we never did a whole lot with food items!
Then I went to a training!
AAAAMAZING!
(google the ooey gooey lady if you don't know who it is!!)
I love her training and i follow her on twitter, and facebook!
SHE ROCKS!
anyways she brought up the whole food issue
-if the kids only meals are while they are in your care,
then that also means the only time they get to experience life positivly is in your care!-
so to sum up what she said was, these kids need you to
feed them, clean them, hold them, love them, and EDUCATE THEM!
and if that means using a few spaghetti noodles to do so than do it!

SO TODAY WE DID IT!!

They LOVED it!
It was like the best painting experience ever!
The pictures are just smeared, nothing exciting was created
but the language, and the laughter
was worth
THE MESS!!

Here are some pics!
(i didn't get very many because I was covered in red paint and didn't dare touch the camera after that) 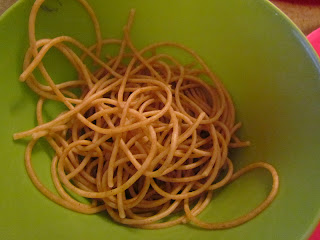 i boiled about 20 noodles!  So you really aren't "wasting" a whole lot! 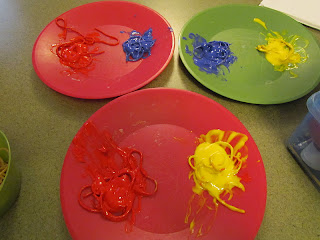 dip them in globs of paint!
I was going for primary colors so the kids would mix the colors to make new colors!
for some reason we just got a whole lot of red and a little purple!!!
But when purple was discovered the crew went NUTS!!! 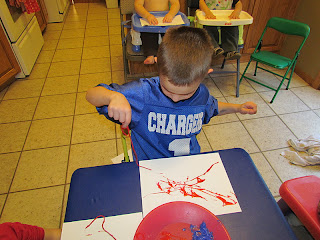 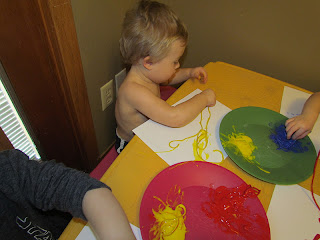 this little dude just laid on the noodles on his paper, picked them back up and did it again! 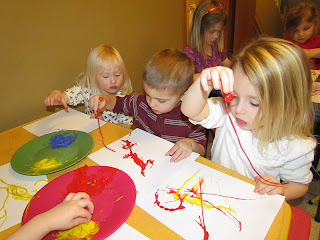 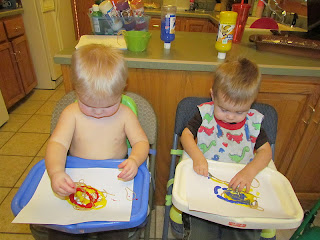 ahhh and then the "babies"  They LOVED this!  and they were covered in paint when it was over!
I laughed so hard! -and stepped in a pile of spaghetti!- 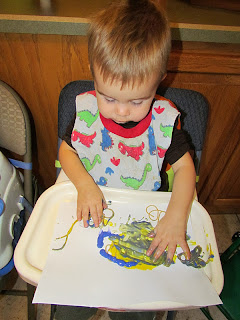 his paper was ripped and destroyed he was so into rubbing the paint all over!
-his noodles were the ones I stepped in- 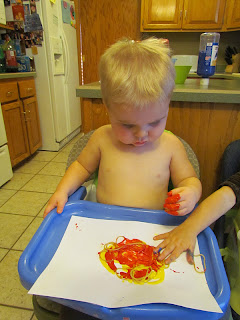 this little man took a little longer to get into it!
but don't worry your friend will help you out! 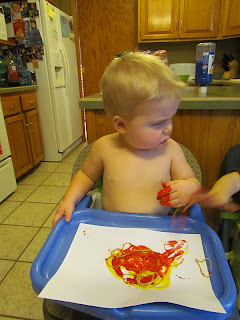 look at that face of disgust because his buddy was helping him out!!
back off dude this MESS is MINE! 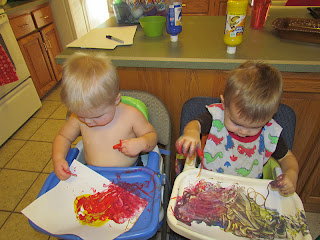 concentrating so hard!!
-and then i got red paint on my hands so the pictures stopped!

But so much fun was had by all!
Now go out buy some spaghetti for supper and use a few noodles for painting!!

Posted by Jill@babies, toddlers, and preschoolers, Oh My! at Monday, January 09, 2012