I wish I was creative enough to come up with a lot of the stuff I do!
But mostly I steal ideas!
I have a lot up my sleeves,
but I go to education classes,
buy children craft books,
and am addicted to pinterest
for a reason!
But it is a very GOOD reason!
my kiddos are
learning
and of course
having FUN!!!

I discovered a fun way to paint on pinterest!
and just had to try it!
Well since I pin about 5 new things a night
this idea got shoved off and forgotten about
But my new years resolution is to plan each month,
so I went through my pins and Rediscovered this!

Condensed milk and food coloring =
BEAUTIFUL SHINNY PAINT!
i had 2 cans in my pantry and thought for sure I would NEED both cans!  WRONG!  i used 1/4 a can and 11 kids did the project! a little goes a LONG ways! I wish i had a recipe to use the other part of the can so it doesn't go to waste!!

yes its sticky!
but drys smooth and shiny!!!

Its very similar to corn syrup and food coloring but isn't as sticky, its easier to move around with a brush, drys quicker (MUCH MUCH quicker) and it is not as heavy!

The toddlers and preschoolers LOVED this!!!
so of course I bring you pictures!! 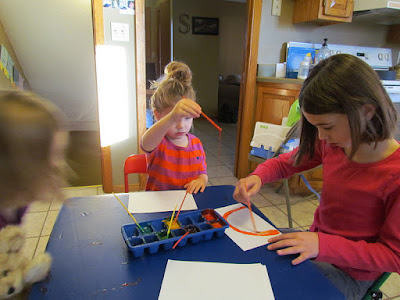 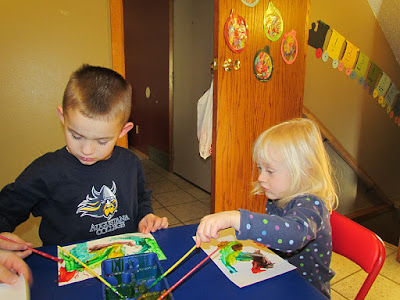 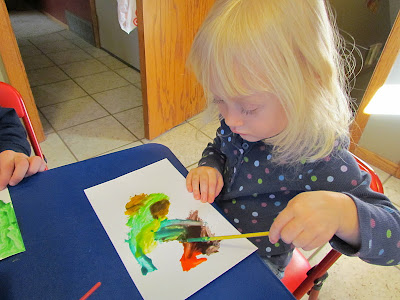 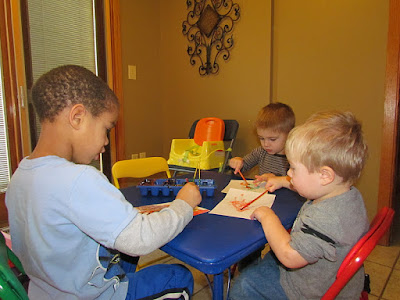 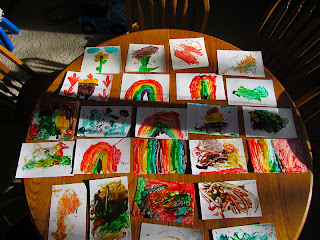 poor pics but I had all the blinds open for sunlight because i was worried these were going to take days to dry!  but its not even 2 in the afternoon and pretty much all dry!! 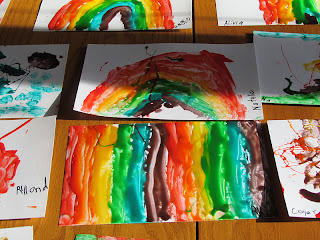 its funny how when one kid makes a rainbow they ALL have to make a rainbow!! 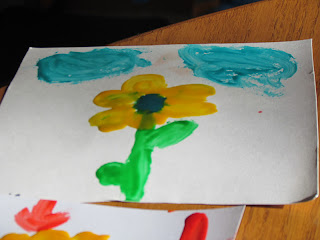 Off subject but I just want to remember today:
Its January 4th, 2012 and today we went for a walk around the block, and played outside for over an hour!
you see normally I would spend over 45mins dressing kids shoving boots on hats gloves, and then you have the one kid that needs to use the bathroom so you start all over agian on getting him undressed and redressed!  Then you throw the kids in a snow bank, point and laugh and then go get the kid that fell in the middle of the yard and cant get back up because the snow is to deep and he is crying because his boogers are frozen to his face and snow got inside all those clothes we spent 45 mins getting on!
But NOT today!  Today we put coats on (some had fall jackets) and we just went outside and played! 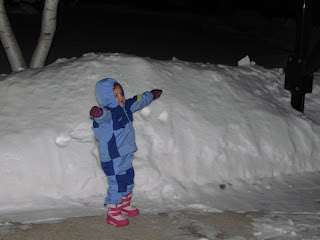 This pic was taken in January of 2011 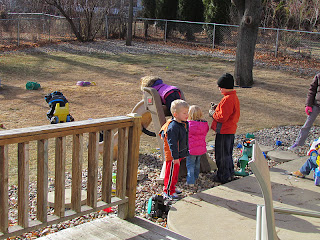 Linking up with THRIFTY THURSDAY!!!

Linking up with Toys in the Dryer!
Posted by Jill@babies, toddlers, and preschoolers, Oh My! at Wednesday, January 04, 2012